● Thanks to its elegant, imposing appearance and its character is collie considered to be nobility of dogs. The collie is very intelligent, sensitive, empathetic and very kind dog with balanced calm temperament. Collies love children and watch over them carefully. They are tolerant to them and they have enormous amount of patience and love. Collie rough is one of the best family dogs and they are very happy when they can spend time with members of family, which they are part of. This breed is never nervous or aggressive, despite it, it is always loyal to its family and can be great watchdog. Collies behave carefully to foreign people and consider whether they accept them or not.

Collies belong to kind of dogs that are not difficult to keep, they learn easily, quickly and joyfully. However collies do not like rough physical and psychological treatment, you do not have to shout on it, the collie will understand when you just look at it ugly or when you slightly raise your voice on it. The collie shows its loyalty to the owner by not running far from him during walk, it always observes him.

The collie is an extremely friendly and faithful creature and can be loyal to everyone who knows and wants to accept it. 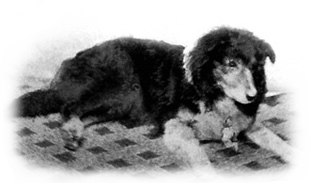 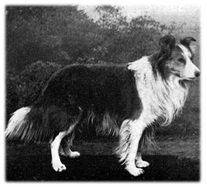 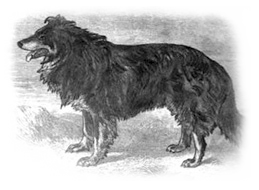 ● The Collie’s exact origins are shrouded in mystery and now it’s impossible to say, with accuracy, from where these highly intelligent dogs derive. We know that inhabitants of the upland regions of the British Isles required a specialised breed of lithe, active dog, built along the lines of strenght and endurance, but capable of sudden burst of great speed, with coat, which protects them in all kinds of weather. These herders also needed obedient and intelligent dogs, which are able to work on their own initiative. 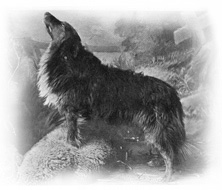 The origin of the word “Collie” is as obscure as the breed itself. Probably it comes from “Colley” – the Scottish black-faced sheep, which were shepherded by collies.

After the industrial revolution, dog ownership became fashionable, and these early collies were believed to have been crossed with the Borzoi (Russian Wolfhound) to get a more “noble” head, which is today one of the true characteristics of the Rough Collie. Other crosses occurred with the Irish Setter and Labrador Retriever. The Irish Setter cross is the only one that could have genetically resulted in the introduction of the sable colour to the Rough Collie breed.

One of the most important Collies, a dog named Old Cockie, became recognized in 1868. All show Collies trace back to Old Cockie through his sable and white grandson Charlemagne, whose pedigree shows the only two sables: Maude, his dam, and her sire, Old Cockie. Old Cockie live fourteen years as a cherished and pampered companion of Mr. James Bissell. He was born in the late 1860s, and it is one of the first well-known collies and it is also believed that he introduced the genes for the gorgeous sable colors present in the collie. He also became a solid base for breeding a modern collie. His famous son Coksie significantly contributed to the ennoblement of breeding collies.

Trefoil, Honpipe and Hulakin was another famous collies. Three males (all tricolored) from the late 1800s that became the foundation of the collie breed as we know them today. They were bred by S.E. Shirley. Trefoil, who can be traced back in the lines of many purebred collies today, sired Charlemagne who first appeared in the show ring in 1877 and went on to become a champion and make a large impact on the breed as well. Charlemagne became the grandsire to Ch Metchley Wonder – a top winning Collie.
Collies are also popular thanks to Queen Victoria, who visited the Scottish Highlands during the 1860’s and fell in love with them.

On the territory of Slovakia, Collies became more popular after the release of the movie “Lassie come home”. The first attempts to established a club of breeders of collies were in 1924 and 1936, but the Club was not founded until 1947 in Czechoslovakia. Since then, the future of the breed has been assured. Many changes have taken place until then and the result is in it that we have our own Club of breeders of collies and shelties in Slovakia.

BRIEF HISTORICAL SUMMARY: The rough and the smooth Collie is the same with the exception of coat length. The breed is thought to have evolved from dogs brought originally to Scotland by
the Romans which then mated with native types. Purists may point to subtle differences which have appeared as individual breeders selected stock for future breeding, but the fact remains that the two breeds derived very recently from the same stock and, in truth, share lines which can be found in common to this day. The Rough Collie is the somewhat refined version of the original working collie of the Scottish shepherd, from which it has been selected over at least a hundred years. Many of the dogs can still perform satisfactorily at work, offered the chance. The basic message is that for all his beauty, the Collie is a worker.

GENERAL APPEARANCE: Appears as a dog of great beauty, standing with impassive dignity, with no part out of proportion to whole. Physical structure on lines of strength and activity, free from cloddiness and with no trace of coarseness. Expression most important. In considering relative values it is obtained by perfect balance and combination of skull and foreface, size, shape, colour and placement of eyes, correct position and carriage of ears.

BEHAVIOUR / TEMPERAMENT: Friendly disposition with no trace of nervousness or aggressiveness. A great companion dog, friendly, happy and active, good with children and other dogs.

HEAD: Head properties of great importance must be considered in proportion to size of dog. Viewed from front or side, head resembles a well-blunted clean wedge, being smooth in outline. Sides taper gradually and smoothly from ears to end of black nose. Viewed in profile, top of skull and top of muzzle lie in two parallel straight lines of equal length divided by the stop. A mid-point between inside corner of eyes (which is centre of a correctly placed stop) is centre of balance in length of head. Depth of skull from brow to underpart of jaw never excessive (deep through).

Eyes: Very important feature giving sweet expression. Medium size (never very small) set somewhat obliquely, of almond-shape and dark brown colour, except in the case of blue merles when eyes are frequently (one or both, or part of one or both) blue or blue-flecked. Expression full of intelligence, with quick, alert look when listening.

Ears: Small, not too close together on top of skull, nor too far apart. In repose carried thrown back, but on alert brought forward and carried semi-erect, that is, with approximately two-thirds of ear standing erect, top third tipping forward naturally, below horizontal.

TAIL: Long with bone reaching at least to hock joint. Carried low when quiet but with slight upward swirl at tip. May be carried gaily when excited, but never over back.

LIMBS
FOREQUARTERS:
Shoulder: Sloping and well angulated.
Elbow: Neither turned in nor out.
Forearm: Forelegs straight and muscular, with moderate amount of round bone.
Forefeet: Oval; soles well padded. Toes arched and close together.

GAIT / MOVEMENT: Distinctly characteristic in this breed. A sound dog is never out at the elbow, yet moves with front feet comparatively close together. Plaiting, crossing or rolling is highly undesirable. Hind legs from hock joint to ground when viewed from rear to be parallel but not too close; when viewed from side, action is smooth. Hind legs powerful with plenty of drive. A reasonably long stride is desirable and should be light and appear effortless. Absolute soundness essential. 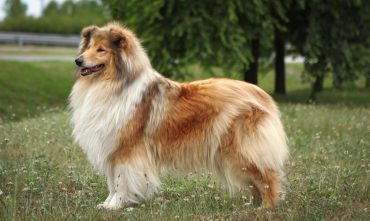 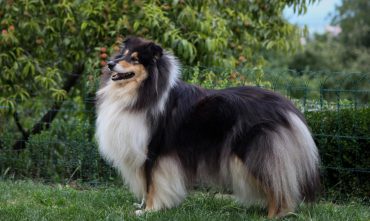 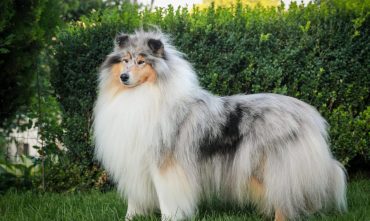 FAULTS: Any departure from the foregoing points should be considered a fault and the seriousness with which the fault should be regarded should be in exact proportion to its degree and its effect upon the health and welfare of the dog and on its ability to perform its traditional work.

· Aggressive or overly shy.
· Any dog clearly showing physical or behavioural abnormalities
shall be disqualified.

· Male animals should have two apparently normal testicles fully descended into the scrotum.
· Only functionally and clinically healthy dogs, with breed typical conformation, should be used for breeding.

The latest amendments are in bold characters.